Goat of the Week – The Icelandic Goat 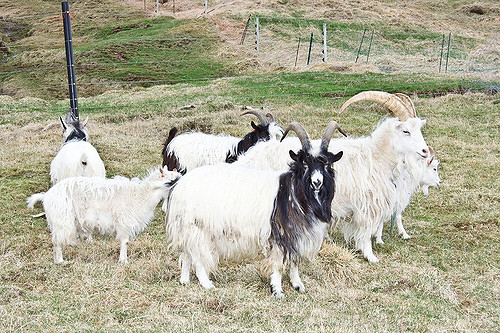 The Icelandic goat is an ancient breed also known as ‘Settlement Goat‘. They are believed to be of Norwegian origin, and dating back to the settlement of Iceland over 1100 years ago. It is believed the Icelandic goat was brought to the country by the first settlers, who came mainly from Norway. Historical evidence and records from as early as 1703 AD document that these goats have been kept in various locations around the country in very small numbers. Such small numbers, in fact, that they were on the verge of extinction during the late nineteenth century. Efforts to preserve this breed were undertaken just prior to WWII.  Since then the numbers of this goat breed have gradually risen. A rare breed census showed there were 849 goats in Iceland at the end of 2012, and it is believed their numbers have risen even higher in the last 5 years.  The Icelandic goat is the only farm animal sponsored by the Icelandic government for the purpose of ensuring its survival.

Icelandic goat is a beautiful small-medium sized animal. Coat colors vary, but tend toward white with additional streaks and spots of various colors. A high quality cashmere fiber can be derived from their fleece.

Examples of this breed can be seen at the Haafell Goat Center in Reykholt (also known as Goats and Roses), just a 1 ½ hour drive north of Reykjavic.  Travel by car up Highway 1 along the spectacular coastline before heading inland to the farm, where one can also find Icelandic horses and chickens.  A very nice destination for a family outing.  Plus, if the kids absolutely fall in love with one of these goats, they can adopt one!  No, they can’t take it with them, but their donation entitles them to regular pictures and updates from the farm detailing their caprine friend’s activities.  For adults the on-farm store offers many goat goods, very reasonably priced.  Cheeses and sausages will tickle your palate.  This is a great agritourism destination that allows the family to interact with the goats made famous in ‘A Game of Thrones’.

For a taste memory of your trip to Iceland, try making your own Skyr and Skyrkaka when you get home. Skyr is a uniquely Icelandic product and this light no-bake cheesecake made with Skyr is enjoyed all over the country.

Although this has been traditionally made with low fat cow’s milk, a richer version is now becoming popular as the number of goats in Iceland increases.  This recipe for homemade Skyr courtesy of http://julesfood.blogspot.com/2011/04/skyrhomemade-icelandic-yogurt.html

This is my adaptation of this recipe.

Innoculent –  Siggi’s Skyr, or another brand if you can find it
liquid Rennet… (vegetable base)
or…1/2 Rennet tablet dissolved in a little cold water
good thermometer
good quality stock pot, stainless steel
towels for wrapping up pot
big square of butter muslin
a large strainer

Make sure all of your utensils are sterile.  Heat the milk slowly up to 195 F degrees.  Be careful not to burn the bottom.  Slow heating, a heavy stainless pot and constant stirring will prevent this.  When it reaches 190-195 degrees, turn off and cool to 110 F degrees.  Mix 4 Tbsps of your starter (Siggi’s or other live active culture Icelandic yogurt) with a couple of Tbsp of the warm milk (one at a time) in a small cup until it seems combined and pourable.  Add this mixture to the warm milk and stir, being careful to scrape up any milk solids that may have formed at the bottom of the pot.  Now add the Rennet… 7-8 drops for 1 gallon if milk…again…stir carefully.

Cover your pot and wrap it in 2-3 towels and leave it on the counter. Let it sit for at lease 14 hours.
Uncover and take a peek.  It should be a pretty solid mass and there should be some visible whey (yellowish liquid).  if it still looks and acts like a pot of milk…something has gone wrong.

Using a sterile bread knife, cut the curds into 1 inch cubes, being sure to run the knife sideways through the curds, otherwise, you will get 1 inch columns.

Line a colander with a piece of butter muslin large enough to lap over the edges. Pour the curds in, pull the edges of the muslin up and twirl the bag ever so slightly.  Place back in the colander in the sink and let it drain this way a while longer. When it looks as though the dripping has slowed…gather the four corners, tie and hang from a wooden spoon (or something) over a saucepan to catch the whey.  Allow complete draining in a  cool, well-ventilated room or the refrigerator. This should take a few hours.  Your end result should be firm and a bit dry around the edges of the cloth and a little thicker than commercial Greek yogurt, but not as thick as cream cheese.  Remove from the cloth and place into a large bowl and stir or whisk until perfectly smooth.

NOTE…the consistency should NOT be grainy like cottage cheese…stir or whisk until smooth.  if it is too thick you can stir in some of the whey or beat in a little cream and sugar for a richer, sweeter treat.

Once it has come to this stage, you are now ready to make Skyrkaka (Icelandic cheesecake). 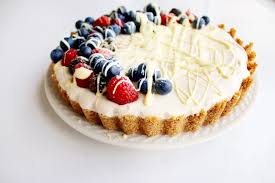 8 ounces digestive biscuits with dark chocolate  (available through Amazon) or